Lishman’s has appointed two new business partners – butchers Joe Smith and Andrew Waterhouse – in a move destined to secure the future of the long-established company, one of Britain’s best-known independent retail butchers. 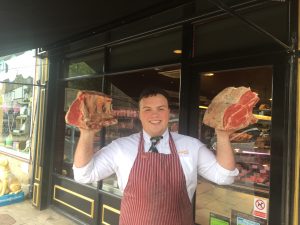 The duo join current partners, owner David Lishman, who established the business in 1986, and his 32-year-old daughter Emma Lishman, who came on board in 2015 and became a partner in 2018.

Joe, 28, started work at Lishman’s as a 17-year-old in 2010, serving his apprenticeship and gaining recognised industry qualifications. He was promoted to assistant shop manager in 2013 and is currently retail butchery manager.

In 2014, Joe, from Keighley, was crowned Yorkshire champion in a national Young Butchers Creative Meat Display Competition. He has also had the honour of representing England in European Butchery Competitions. 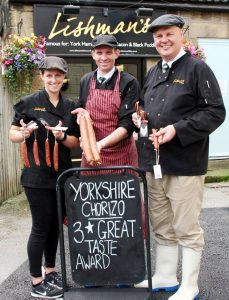 Andrew, 36, originates from Zimbabwe and, while learning his trade in the UK, returned to his native country to further his butchery skills. Now living in Skipton, he joined Lishman’s in 2017 as a craft butcher and in 2019 was appointed butchery production manager, including hands-on responsibility for the charcuterie arm, first launched in 2010.

It has since expanded and diversified beyond recognition, so much so that a standalone charcuterie production unit has now been established in Skipton on the town’s Snaygill Industrial Estate. It acts as a drying (drying and maturation facility for Lishman’s cured hams and salamis, which take up to nine months to mature and are then cut, packed and shipped countrywide to delicatessens, farm shops and high-class restaurants.

A pioneer in its field, Lishman’s has won multiple awards in charcuterie-related industry competitions, among them Champion Producer in the 2019 British Charcuterie Live Awards, plus a trio of coveted top-rated Great Taste accolades. 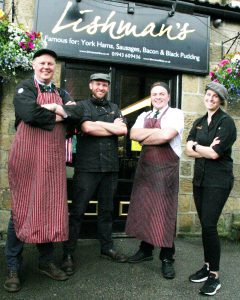 David Lishman said: “We are delighted to welcome Joe and Andrew on board as partners. They have become key players in the business and are gifted butchers who represent the very future of our industry sector.

“The move forms an integral part of our company succession planning and continuity policy. Joe and Andrew will become involved in decision making and help the business continue to flourish and move forward. Along with Emma and myself, we are now better equipped to drive the business forward with additional input from highly skilled people, along with support from the entire team.”

The Leeds Road shop, which has just launched its 2021 Christmas & New Year festive dining brochure, has won numerous awards for its across-the-board product ranges over the years and in 2017 was voted Butchers Shop of the Year, a high profile achievement accredited to each and every member of his 18-strong team by David Lishman, who is immediate past national chairman of Q Guild Butchers.