The Glories of Highland Cattle 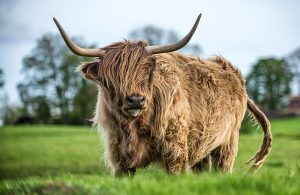 Highland Cattle. What are they?
These shaggy coated long horned cattle thrive on the rough pasture and hillsides of their native Scotland. Probably the most handsome of all cattle breeds, they produce wonderfully flavoured beef with a marbling of fat, synonymous with many British breeds, which naturally bastes the meat whilst it cooks, enhancing the taste and succulence.
What makes them so good?
They live a natural diet on poor pasture land. This means they take on the more beefy flavour we are looking for, through the herbage they eat. They grow slowly because of this diet, which is another aspect of gaining more flavour.
Why aren’t there many around?
These were once an endangered breed, because there are other cattle out there which gain weight faster and turn into profit more quickly for the farmer hence, there was a lack of interest in the bony fellows.
Where do they come from?
Highland cattle originated in the Highlands and Western Isles of Scotland, where the weather is cold and their thick coats came into good use. They have now been exported all over the world, but ours come just 10 miles from the Harewood Estate where the Earl of Harewood has a pedigree herd in the park. We don’t have it all the time, just as and when these cattle are available.
What is available?
We butcher these sides into the usual cuts – roasts, steaks, casserole pieces, and some fantastic burgers are on offer. Get it whilst it’s available.
Is it expensive?
We give a 10% to the farmer, as it generally takes twice as long to mature and costs more to produce. We charge a 10% on selling it – I don’t think that’s expensive, do you?