Christmas Time on the Farm 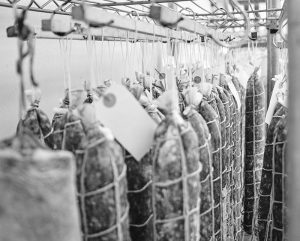 Being the son of a farmer, growing up in the late 60′s and 70′s, Christmas was, and still remains a hugely busy time of year for me. My mother, (it was the domain of the farmer’s wife) reared and fattened turkeys, chickens and geese to sell at the farm gate for the festive period. It was a continuation of a trade which had been started by her father before her, and when Grandfather retired, mother continued to serve the same customers and their families for years after.

The year started in June, when the ‘day old’ turkey poults arrived from the hatchery. I recall riding with mother to Harrogate railway station, where cardboard containers with straw and special air holes were waiting for us to collect, having been dispatched from Norfolk by train. Quite amazing to think these little birds, which had only been an egg the day before, could survive this journey. They were hardy little creatures and spent 2 weeks in a pen on wood shavings under a warm light. These birds grew slowly in an open sided barn.

August saw the arrival of the chickens. In those days, when we could distinguish between the cock chickens and the hens, we – the children – had to catch each one by the legs. Father would load a rather primitive wide needled syringe and inject a ‘caponising pellet’ under the skin at the back of its neck. This would help the male birds to grow and was a form of castration. This procedure was no doubt recommended by the Ministry of Agriculture in those days, and when it was discovered that putting oestrogen into the meat to be consumed by humans was not a good idea, the practice stopped. People still ask for capons at Christmas, but probably don’t realise what it was all about.

A dozen geese had also been with us most of the summer. These lived in the orchard during the day, and slept in a stone shed at night. My job as a boy was to let out the geese in the morning, opening the door and running as fast as possible whilst the geese exploded out of their quarters and chased me with flapping wings before collecting in a group and appearing to laugh at my near death experience. They ate grass and windfall apples, supplemented with soaked corn, not dissimilar to cold porridge.

The plucking started on the same day every year in December – my birthday! Being a dairy farm, the milking was the priority, and then plucking the turkeys started, and went on late into the evening. Plucking by hand in a warm cow shed, with the cows to keep us company, there would be a group of 8-10 people, chatting away listening to radio Luxembourg crackling and hissing in the background. As the feathers got deeper, (knee deep to a young lad) the turkey barn emptied, then the chickens, and then the geese. The tips of the wings from the geese were saved and used as feather dusters, the dry plucked feathers from the geese were no longer used to stuff the mattresses, but the cattle had the most wonderful bedding for a few weeks after.

The birds were hung in a large wooden shed, where the wind blew through the gaps and missing windows. They kept well for the two weeks until the innards would be removed. This is one reason why farm fresh poultry tastes so good, hanging un-eviscerated matures the bird and gives flavour. This can only be done with dry plucked poultry, – most poultry is wet plucked by machine. After evisceration, the birds were then placed on the stone slabs in the farmhouse pantry and cellar, and were collected in the 2 days before Christmas. Turkeys weighed between 10lb and 25lb, and because they were now 6 months old, had a great texture, and white skin from the fat that had been laid down over the months. Compare this with a supermarket turkey, and you would see that they can be quite purple in colour, lacking both fat cover and flesh, and would be quite slimy due to the wet plucking method. Cock chickens weighed 8lb- 14lb, and were gloriously fatty. Unlike any everyday chickens, they also had great texture and full flavour – and perhaps a touch of female hormone too! The geese were dressed in such a way that the head and feet were also cleaned and placed back inside the bird, peering out of the cavity- all used for gravy and stock. Copious amounts of fat were then placed onto the breast of the bird. This was how it was displayed, a real artisan product.

When I first took my shop in 1986, I would buy the poultry for Christmas from my parents. After 3-4 years, they retired from the Christmas poultry world, and I started to buy from a family friend who could probably tell the same tale as I have just done. The turkeys are all still plucked by hand, hung for around 2 weeks (under refrigeration now) and have the same flavour as ‘mother used to make’. I still buy from the family. The geese no longer are displayed with their feet and head, and no ‘caponising pellet’ is used in the production of cock chickens, but they all taste fantastic and are a real treat for Christmas that you will not get any other time of the year.