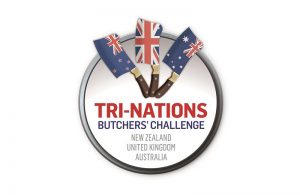 The first ever butchers tri-nations competition has just been held in the glorious countryside around Queenstown New Zealand.

The event involved teams from New Zealand, Australia and The United Kingdom. For the previous 2 years, it was just between the Southern Hemisphere countries, but we were grateful for the invitation this year and five members of the Q Guild packed their knives, and travelled – a long way – to participate. We gathered together a fantastic team and I was proud to captain.

Of course, travelling that distance meant that we wanted to experience the surroundings as well. Queenstown is in South Island, among the mountains, where in winter it falls to -15, but was well into the high 20′s when we were there. It”s a place for outdoor leisure; skiing in winter, rafting and hill-walking in summer.

The first ever bungy jump was made here, and one afternoon, all teams and supporters visited Nevis, positioned on top of mountains, with ravines on either side. I don’t think bungy jumping is for me, but one of our team Richard Carter, jumped, as did some of the others.

The five days were hosted by the wonderful organisation – Beef & Lamb New Zealand, responsible for promotion of red meat to their domestic market. We were made to feel very welcome, and were looked after in a fantastic way. We visited wineries, sheep stations, and many great restaurants in the area.

The final day culminated in the butchery competition held at the Wanaka Agricultural Show. This was a big event by anyone’s standards, 100′s of people watching and with national TV coverage. Each team was given a side of beef and 1 lamb with 2 hours to cut and display the meat in the best way possible. It was a hot and intensive 2 hours. Back home we had mustered our team for a couple of practices, but with our team Jon Thorner from Somerset, Robert Jones and Richard Carter from the Midlands, and Brindon Addy and myself from Yorkshire, it’s not a simple challenge.

How did we do? Well, third place out of three doesnt sound too impressive, but we were certainly nudging second place. The New Zealanders won, and rightly so, but come next year, the return leg which will be held in England, we know a little more of what is expected of us, and we could surprise a few.

We made lots of new friends from Australia and NewZealand, and shared lots of ideas which we will all benefit from.

This could not have been possible without the help of our sponsors who put some of the money in towards the costs of the trip. Our main sponsor being EBLEX – English Beef and Lamb Executive, with assistance also coming from Dalziel, Weddel Swift, Lucas Ingredients, Meat Training Council, Hartshead Meats and Jarrett’s.

We are also very grateful to our host Beef & Lamb New Zealand, and their Australian counterparts MLA.

Bring on next year guys!