Recently I had the honour and pleasure of captaining the British Butchery Team in the second Tri-Nations Butchery challenge.

This event pits 6 of the best butchers from Australia, New Zealand and Great Britain, in a 2 hour competition where they cut and display 1 lamb and a side of beef per team, in such a manner that shows off the true skills and craftsmanship of each group.

It’s the second time the ‘Tri-Nations’ has been held and the first time in this country. Last year we had an excellent visit to South Island, New Zealand, and next year will be a return leg to Australia. Prior to this, the event had been run between the 2 Southern Hemisphere countries for a couple of years. 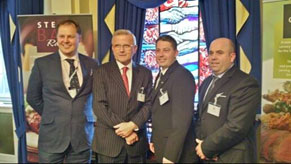 This event is a true meeting and exchange for like-minded and forward-thinking butchers at the top of their profession in the independent meat sector. Guys who are passionate about the quality and provenance of the meat they sell, and who care about the future of butchers shops in their own countries.

The gala dinner at the wonderful ‘Butchers Hall’ London

The British team was made up of butchers from 6 Q Guild shops. The Q Guild is the organisation that all good butchers should aspire to be part of. These included Walter Smiths, Aubrey Allens, James of Shepperton and Lishman’s of Ilkley. 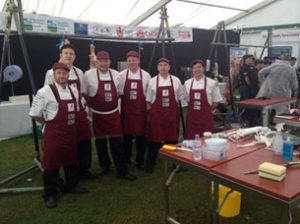 The British team ready for action

The study tour, organised by EBLEX – the organisation for British Beef and Lamb – was an impressive 7 day event which showed our visitors the best of the meat and agricultural industries in London and Yorkshire. There were visits to butchers shops, abattoirs, Butchers Hall, farms and many restaurants; all showcasing the best meat we have to offer. 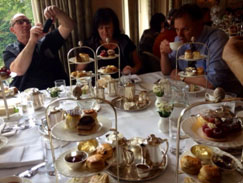 Afternoon tea at Betty’s. Very English to the antipodeans

The trip culminated in the competition itself at the Great Yorkshire Show, the UK’s largest agricultural show, M.C.’d by the Q Guild’s Chairman and our very own ‘Godfrey Bloom’ – Mr Brindon Addy, before a mad dash back to London for the awards ceremony at The Meat Trades Journals Supermeat Awards dinner with Myleene Klass hosting. 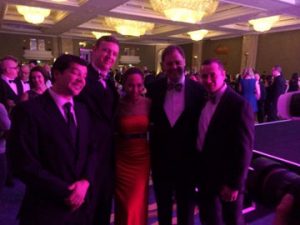 For the second year running, the kiwis took the top spot with a stunning display that was incredible to see. See this video for the challenge in a YouTube nutshell. 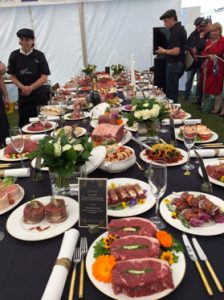 The winning NZ display with Abigail, the only Girl Butcher in the teams

During the tour, I met many new friends who share the same philosophy as all good butchers, and I very much look forward (hopefully) to being part of the team that travels to Australia next year, when we will have a little score to settle!! 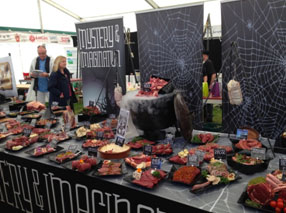