In Defence of Salt 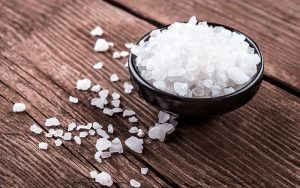 Salt’s ability to preserve food was a foundation of civilization. It eliminated the dependence on the seasonal availability of food and it allowed travel over long distances. However, salt was difficult to obtain, and so it was a highly valued trade item. Many salt roads, such as the via Salaria in Italy, had been established by the Bronze age.

The benefits of salt are many. The main being the ability to preserve foods for long periods without refrigeration.

The salting of food changes the texture, flavour and appearance eg. a leg of pork can become a serrano ham, sliced incredibly thinly to produce dark shavings of intensely flavourful protein. And so a whole new eating experience is created.

As with most things, too much of a good thing causes issues. Too much salt in your diet is known to have a detrimental effect on your health. The government’s Food Standards Agency (FSA) is dedicated to reducing salt intake in the British population. An old master curer of hams once told me ‘not too many years ago, the majority of salt in ones diet came from eating butter, cheese and ham, now it’s in every ready prepared food picked up in the supermarket’

Because salt is a natural flavour enhancer, it is used excessively in products that don’t necessarily need it. We consume more salt unknowingly. The FSA set guidelines and supermarkets adhere to them. Unfortunately, eating quality is not a priority when setting these.

Reducing salt across the board, is a heavy-handed tactic which means meat products such as sausage, hams, bacon etc lose their traditional flavours, texture is changed , and product life is depleted. It has a detrimental effect on the enjoyment of  the product.

My recent experience is that sandwiches, as an example, sold in supermarkets, have so little flavour that I’m amazed they sell at all. Food ceases to become an enjoyment, just a fuel for the body.

The reduced salt products on the market have an unpleasant bitter taste and not the preserving qualities associated with the real thing. It should be noted that the sales of table salt are on the rise, as a direct effect of turning out tasteless products.

Salt, a once prized and expensive commodity, is now cheap and taken for granted and vilified. With the advent of less cooking in the home, we have no control over our salt intake other than eating reduced-salt products which, as discussed, doesn’t always lend itself to an enjoyable experience.

As with everything in these relative days of plenty, a balanced diet is the key to good food and health. Cooking more meals from individual ingredients solves this problem at a stroke. It gives us control over our salt intake, and allows the experts in the craft world of meat curing and food preservation to continue making their quality products without the interference of a government body which has little understanding for the artisan food producers.