What makes a British sausage British? 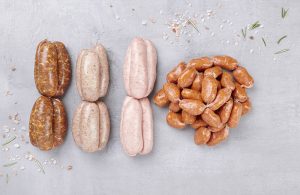 Traditional British sausages used to be made in the winter months. Throughout the autumn, when the roots were plentiful, the pigs would be fed and fattened up until they were big and strong. As autumn moved into winter when the apples had fallen from the trees, and food was less plentiful, the time would come for the pig to be killed. Traditionally the legs were made into succulent hams, and the loins made into bacon.

The trimmings would then be made into sausage. As food stocks were often lower in the winter months, rusk or bread would be added to the trimming to make the protein go further. The pork would be minced with seasonings, salt and the bread to create what we have now come to know as the traditional British sausage.

This style has become intrinsic to sausage production now. Indeed many other British classics originated in this way: the shepherd’s pie would have been traditionally made from the leftovers of a Sunday dinner, the Cornish pasty the same. Butchers did not wish to waste any part of the animal, hence the creation of the Black Pudding. These dishes and products have become integral to the tradition and culinary history of Britain and are to be embraced.

Although the British method was traditionally used to make the pork go further, it has become what we expect as the light textured, flavoursome breakfast sausage. This contrasts with the continental sausage which is made almost entirely of meat – such as the Bratwurst, Toulouse, Nuremburg and Chorizo. These types of sausages have a much denser texture, are heavier and firmer and have less seasoning. You can get a great continental version of the sausage that is 100% meat but it is not something that British people tend to favour.

Often in supermarkets you’ll find the shelves lined with sausages marked at 97% meat, but this is not what we would call a British sausage. A good traditional British sausage should have an amount of bread or rusk, as this helps create the correct taste and light consistency. Often these supermarket sausages are not in the traditional British style, and rather similar to the more heavy continental sausages.

Just because a sausage contains high meat content doesn’t mean that it is a better sausage. A beer brewed at a local brewery with 3.5% alcohol content wouldn’t be considered any worse than a continental beer produced in a foreign country and brewed at 5% alcohol content – and the same reasoning can be applied to sausages. I won the National Champion of Champion’s Sausage title on two separate occasions with sausages of 70% meat content. Meat quantity is important, but so is the amount of bread or rusk used.

What you must consider is not the lower percentage of meat in British sausages, but rather whether they are made with good quality British pork. Rather than having high welfare standards, and good quality pork, often these supermarket sausages contain either imported pork or cheaper cuts such as jowl and pork rind rather than belly and other good quality trimmings.

My advice is to find a butcher has an artisanal approach to the manufacture of his sausages. You need to find a craftsman that has a passion for what he considers the creation of traditional British sausages, using quality British pork.