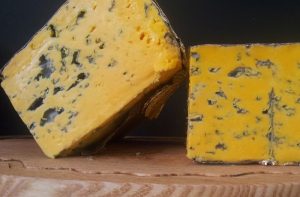 As a foodie, I appreciate a good cheese just as much as a good cut of meat. We have eight Yorkshire cheeses and two guest cheeses, all of which are available to try inside the shop. Some of the cheeses include traditional Wensleydale and Jervaulx blue from Wensleydale dairies, as well as Yorkshire Blue from Shepherd Purse. One of the cheeses that I enjoy the most is Blacksticks Blue, which is not only one of the guest cheeses, but a valuable part of a five piece cheeseboard.
The wonderful colour and taste of this cheese makes it an upbeat British classic that stands out against other blue cheeses. It offers a deliciously creamy yet tangy taste. Named after the tall group of Chestnut trees at the farm near Inglewhite, Lancashire, the distinctive orange cheese has great blue flavour combined with a soft, silky texture.

To produce the cheese, the curds are hand cut, stirred and poured into moulds before resting. This gives the cheeses time to drain naturally, resulting in the characteristic Blacksticks texture. Each cheese is then pierced to create the wonderful blue veins, then hand wrapped and left to mature for eight weeks to achieve optimum taste and texture.

Why not head in to the shop and have a taste?