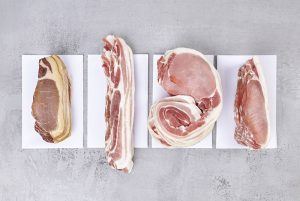 This week (21st-27th March 2011) is Bacon Connoisseurs’ Week, where those of us that are proud about the bacon that we are producing, like to make a noise about it! All this week we have some special varieties of bacon on offer, alongside the bacon that you normally see in our cabinet. All of our bacon is cured on site, by hand, with those that are smoked done in our own smoke house. This means we know exactly how good the bacon is, and can guarantee the quality for everyone!

Curing meat is a historical process, previously done for necessity rather than flavour as it is today. In the past (as recent as the war years) many people kept their own pigs for food, and slaughtered and butchered them themselves. This was done in the Autumn, when the pig was nice and fat from the summer, and there was not much food left for it to eat. Because one pig can provide so much meat, it was necessary to preserve much of it in order to last the family through the winter. This is where curing comes in. The addition of salts, nitrates and nitrites to the meat kills bacteria and enables it to last for a much longer time than it would do as a fresh product. So you would cure the loin into bacon, and the leg into a ham and hang it in the barn surrounded by cobwebs so the flies couldn’t get to it.

Dry curing is the best way to produce bacon, avoiding all the water that you can find in injected supermarket varieties, but as long as you buy your bacon from your local butcher, brined bacons are also good (unlike the supermarkets, butchers value the product too much to inject brine up to beyond more than 10-15% of the weight, much of which comes out during the cover brining and hanging process anyway).

So, what are our special varieties? This week we have Gloucester Bacon, which has been cured in cider to give it a sweet finish; a Farmers’ middle bacon, using the loin and belly of pork, cured to be slightly saltier than modern bacons-it is a proper old fashioned bacon; our Barden Smokey bacon, which has been cured in beer and molasses, and then double smoked in our smokehouse to give a nice strong flavour; and our Olde York Streaky Bacon, which is cured in an old fashioned way, so is slightly more salty, and full of fantastic flavour.

We like to give people a taste of what real bacon should taste like, especially those who have been buying their bacon from the supermarkets, where many are just so pumped with water that you don’t get the taste experience. In fact, we are so keen that you come and buy our bacon, that we are offering FREE Black Pudding and Sausages when you buy some of our limited edition flavours. Why not come into the shop and try some for yourself?