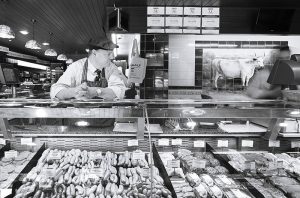 Two award-winning businesses have been selected for a royal visit next month.

And when Princess Anne meets staff at Ilkley Brewery, she will launch a beer to commemorate the Queen’s Diamond Jubilee. The Princess Royal will also see butcher David Lishman produce Yorkshire sausages on her visit to Ilkley on Tuesday, April 3, as part of a wider trip to West Yorkshire.

Last night, it was revealed the royal visitor has personally selected the two businesses to visit after a string of regional and national awards for the brewery and, for Lishman’s, a regional Countryside Alliance Awards win.

Stewart Ross, a director at Ilkley Brewery, said: “This is such an incredible honour for everyone here at the brewery, and our families. To hear that the Princess Royal was actively involved in choosing the businesses she would like to visit makes the occasion even more special. We are all immensely looking forward to welcoming her to Ilkley and hope to give her an inspiring and enlightening visit.”

David Lishman, a Q Guild Butcher and twice Champion of Champions winner for his sausages, said: “It’s been a tremendous year for Lishman’s following our region-wide Yorkshire Sausage campaign last summer and our recent ‘rural Oscars’ success so, to top all this off with a visit from Her Royal Highness is wonderful.

“We are thrilled to be part of this royal visit to Ilkley and look forward to meeting HRH The Princess Royal at our Leeds Road shop.”

At the brewery, the Princess Royal will get the chance to sample Ilkley Jubilee, a special ale to celebrate the Queen’s Diamond Jubilee.

She will also unveil a commemorative plaque which will celebrate the installation of Ilkley Brewery’s sixth fermentation vessel, which will allow the brewery to increase the number of pints it makes each week from 33,000 to 40,000.

During her visit to Lishman’s, the royal will be shown the latest salami production venture which uses locally-reared meat to make traditional, artisan salamis.

Princess Anne will then become the first member of the royal family to see Lishman’s Yorkshire sausages in production and will see one of Lishman’s butchery classes in action before she unveils a commemorative plaque and receives a Lishman’s hamper.