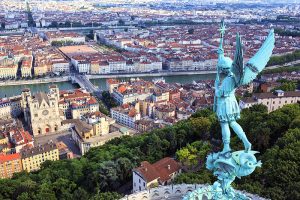 Lyon, in central France, is the third largest city in the country and first became a hub for the silk trade when merchants plied their business there. Situated on the banks of the River Rhone and the River Saone, it’s a beautiful city with fine Bourgeois architecture.  Lyon is recognised as the gastronomic heart of France where there is an abundance of many raw materials; including the Charolais Beef, the Beaujolais wine situated just to the north of the city, along with a huge interest in all things piggy.

On a recent visit to this wonderful and cosmopolitan city I dined at some of the restaurants. One of the first restaurants there is Brasserie Georges. Built over 100 years ago, this wonderful cavernous art deco building can seat over 300 people. Typical Lyonnais dishes included Calf’s Foot with Lentils – a very traditional dish with pieces of calf foot that had jellified beneath the green and succulent lentils.

One of the most celebrated recipes on almost every brasserie menu in the city is Pike Quenelles: at Brasserie Georges these were large, juicy and in a pretty strong stock. But the pièce de résistance is their Andouillete Sausage. This is a sausage filled with chitterlings. Chitterlings are a product that have really lost favour in this country: pigs intestines are rolled up and stuffed inside a further sausage skin, served with a creamy mustard sauce. The dish is beautiful to look at. The flavour is actually quite acceptable with a firmish texture and is incredibly filling.

Now it has to be said that although in the Gastronomic heartland of the country, the food of Lyon does tend to be rather the same – it’s quite heavy, very much orientated around the pig and there are many gelatinous products, so you don’t go to Lyon to lose weight. The grilled pigs feet with tartare sauce were an absolutely wonderful find, and a dish which I shall be preparing at home.

Lyon is blessed with the highest number of restaurants in any part of France. They are on every single street corner and in between. The oldest style restaurant is called Le Bouchon which actually means cork. At Le Bouchon you will see just a few, but very traditional dishes – and often the grandma in her slippers serving her dishes as she has done for the past 50 years.

This city is also home to some of the world’s best charcuteries including G Reynon and Bonnards. These produce some of the finest artisan salamis and sauccissons in France and are recognised all over the world for being masters of this art. The modern marketplace Les Halles de Paul Bocuse, named after Lyon’s most famous Michelin star chef, is also filled with many great charcutiers, bouchiers and foodie places.

Lyon is a truly wonderful place to visit if you have an interest in food.