Is this the death of the small butcher? 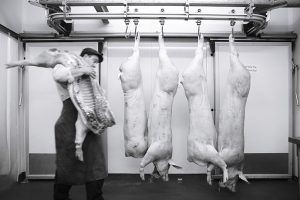 This evening myself and many small butchers from the Bradford region were invited to a presentation by our local environmental health authority. It was a meeting in which EHO’s informed us of the new rules and legislation, brought out by the Food Standards Agency, which would be implemented.

I know this is boring, but please stick with me here.

Some of the new rules are the ‘ready to eat’ food (RTE) must be kept in a totally separate area of the shop, and that serving staff must only serve raw meat, or RTE food, not both.

Traditionally, staff have served both raw and cooked, with the simple procedure of washing hands in between.

The reason behind this is that there is a bug ‘E Coli0157’ which is present in some meats. Very sadly, a little girl in Wales died some years back, having consumed cooked meat at school which was contaminated with this bug, that had been supplied by a butcher.

So, traditional butchers, the ones who have cut and supplied sausages and joints of meat, as well as making pies and roasting hams, are considered to be high risk. Cross contamination risk and all that.

Butchers will now need to implement these changes, or face enforcement and/or closure by EHO’s.

Many butchers at the gathering tonight were husband and wife, father and son teams. Not big enterprises. They have small shops that couldn’t justify the expense of employing and extra member of staff to simply serve pies and cooked meats. The alternative would be to stop selling either the cooked or the raw product. Again not an option to most, as sales and profits are equally as important from both sectors.

It may not seem a huge issue to many people, but some of these businesses tonight have been in the family for 2 and 3 generations, and I truly believe that when this legislation is implemented, we will see the closure of yet more small butchers. This is in the wake of the closure of almost all small abattoirs, the ones which used to slaughter 2 or 3 cattle and sheep for their own shop, plus a few more for the butcher up the road, which have now disappeared because of too many regulations making it impractical to continue the operation. The effect of this is that now farmers must take their livestock further to reach the factory abattoirs, causing greater stress and lower welfare for the animals. A result of badly thought out and implemented changes in legislation.

It is incredibly sad that a young girl died of Ecoli, but surely by effectively closing down many small family butchers, with the knock on effect this has to surrounding shops and businesses, does this then not warrant some serious thought?

Do we want every high street in the land to look the same as each other? National chains of coffee shops, charity shops and opticians, whilst the shopping parades are boarded up with the odd exception of the ‘pay day advance’ bureaus?

It has to be said that the EHO’s were helpful tonight, one genuinely saying she sympathised with our plight. But they will implement the changes, and butchers shops will close as a result.

Raw meat is considered dangerous. On a recent trip to France, I noticed that the most popular dish in a restaurant  was steak tartare – raw chopped steak with an uncooked egg yolk. They don’t seem to worry too much on that side of the channel, and their independent food shops are a prized possession, and seemingly flourishing.